Preface:  Apologies for the gap in posting – I got a job teaching at American University (hooray!!) and have been busy trying to prepare for the move from Pittsburgh.

Last time, I wrote about my desire to compose a piece for piano.  The process that I use to write this piece will be very different from my brass quintet for a couple of reasons:

Caveat:  That is not to say that what comes out won’t be accessible – I do believe that a composer must consider the audience when he’s writing – even if it’s an idealized audience who catches all of your clever melodic/rhythmic/timbral/harmonic (etc.) manipulations (I often put somewhat obscure quotations from other pieces that relate to my subject into my works (for instance, the motive for the sunrise from Ravel’s Daphnis and Chloe appears in my piece called “And I Felt the Sun, Rising” briefly towards the end – you’d have to really be paying attention to catch it, though…) – I think of these like allusions in literature…if the audience gets it, then the context and the work as a whole has been enriched for that person.  If not…it’s not the end of the world).  So I have a hope that people will not just listen to my piece and say “oh golly, how complicated that sounded,” but will instead have some sort of emotional reaction (even if they hate it…hey – at least it made them feel something, right?).

Enough of that…anyway – this time I have a title as well.  I’ve been hoarding this title all year (I meant to write the piece last summer, but my dissertation piece got in the way) – it is called On the Ceiling of the Sky.  I believe (true story) that I came up with it while staring at the ceiling one day.  So that kind of takes the quasi-poetic/romantic-ness out of it.

Armed with the title, I sat down to sketch out the processes that I was going to use, the general feeling of each of the movements (3 shortish ones), and some melodic ideas.  I’ve taken a picture and posted it: 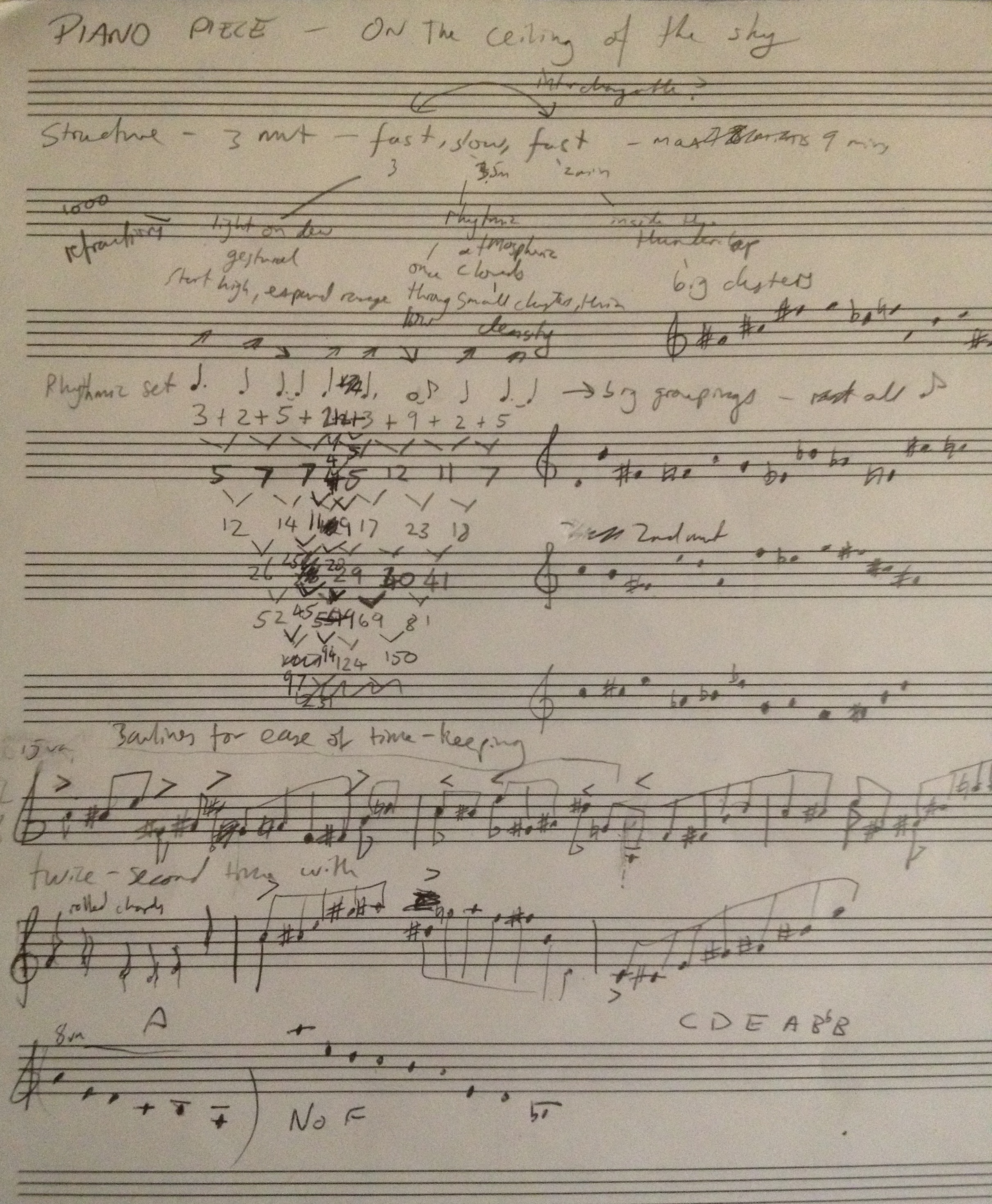 If you can read my writing (and I frequently can’t), you can see that I started with planning the three movements as fast-slow-fast.  By the first I wrote “1000 refractions,” and “light on dew,” “gestural,” and “start high, expand range.”  Now I can tell you without spoiling anything, that three of those ideas made it into the draft I’m working on.  (N.B.  I think that “light on dew” doesn’t mean the same thing as “light on mayo” – I believe it refers to refractions…).

The second and third movements (which I’ll discuss at more length when I get closer to drafts of them) are themed as “atmospheric” and “clouds” (for the second), and “inside the thunderclap” (for the third).  I really like that idea, as in this piece I’m trying to really think about the contemplation and application of time in music.  Music is the most time-sensitive of all the arts – I often think that I don’t give enough thought to time in my planning process – I think about proportions (sometimes), but not about specific temporal actions.  Part of this is practical – let’s say, for a completely hypothetical example, that I wanted to write an orchestra piece where a bell went off exactly 1 minute in, and repeated each minute.  Because of the vagaries of performance, the likelihood of everything lining up and working as intended is minute (excuse the pun).  So that’s my excuse.  But I’m a Dr. now(!), and it’s time to start thinking carefully about all aspects of my compositions.

So the third movement is going to be my temporal zooming in (so to speak) on a thunderclap and what happens (I’m being really tangential today, but this is sort of analogous to the way that music works in Inception – the opera soundtrack they use for the bump (is that right?) is slowed down for the deeper levels of time – you don’t really hear it as the opera soundtrack any more – you hear something more brooding.  But it’s there – you’re hearing the insides of the sound…).  So I’m excited to get to the third movement.  But, since I’m something of a linear worker, I started with the first.

So let’s look further down the page of sketches – I decided to have rhythmic groupings for the first movement that form the bones of the piece – it’s going to work a little like the Ligeti Etude (“Fanfares”) I wrote about a couple of weeks ago – the barlines are largely incidental.  You can see that I made a mistake (as I was writing the movement) that I liked, and so I had to go back and fix my plan – another example of letting the ear lead rather than being strictly academic.

Finally, you can see the beginning of the piece as I was writing it at the piano – I don’t want to go to far into it, as then I’ll have nothing to write about next week, but you can see that I constantly put my accents backwards when writing by hand (who knows why…but that’s why music software is a must for me – backward accents are very unprofessional!), and I was figuring out (as I wrote it) how I was going to use the rhythms, pitches, and barlines.

So next week I’ll delve into the first movement a little more with a focus on shapes, how the rhythmic patterns work, and how I chose the pitches that I did.